We Loved The Lot And The View,
But We Hated The House.

With Upscale’s Help, We Now Have The House Of Our Dreams. 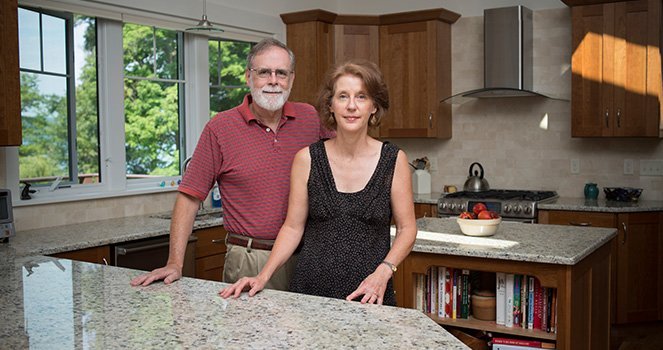 Jim and Elizabeth Gossett were looking for a new home. Their Realtor sent them pictures of a number of houses, and the Gossetts browsed and considered. One set of pictures was from a plain, boxy, lakefront house in Lansing, NY, but they weren’t impressed with the pictures. Then, one Saturday morning, Elizabeth noticed an ad for an Open House being held there that very afternoon. While thinking they were not interested in that property, the Gossetts were interested in other homes in that same area, so they decided to pay a visit. And … that casual stop was life-changing. “What a view!” Jim said when he walked onto the property. “What a lot!” The Gossetts were sold. They bought the home.

But, of course, they now faced the enormous task of turning the unimpressive, rather plain summer home into a year-round home that they could love. They squinted their eyes, scrutinized the house and asked themselves, “What can we turn this into?” They realized that, in addition to considerable updating, the footprint of the home would have to change. So they decided to hire a remodeling company to get started on the daunting task of a total remodel.

Jim and Elizabeth then met with [designer] Rob Morache and AJ, and together they began working on designs. “Rob is very talented and he had great design ideas,” said Jim. “Rob suggested terrific architectural elements that had not occurred to us, like an archway from the great room into the foyer and tapered columns that separate the dining room from the great room. His ideas were excellent.”

Jim was also pleased with the high standards of the workers. “[Lead carpenter] Rich White is incredible, and we developed a great working relationship,” Jim said. If a task was not done to Rich’s satisfaction, he’d require that it be re-done before he’d sign off on it. “I knew I didn’t have to worry about the quality of the work,” said Jim. “That’s why I had Rich. I consider my standards to be high; but Rich’s are higher. That’s what you want in a lead carpenter.”

After an extensive renovation that lasted from fall of 2013 through the spring of 2014, the Gossetts are thrilled with their new home. “The quality of the work is fantastic and we are very pleased,” said Jim. “We wanted to build a home that we loved as much as we did the home that we left. We didn’t want to have regrets and say, ‘Darn, we miss our old house.’ We wanted another house we could fall in love with, and we have that.”