Until Upscale Gave The Outside… Then The Inside… A Total Overhaul. 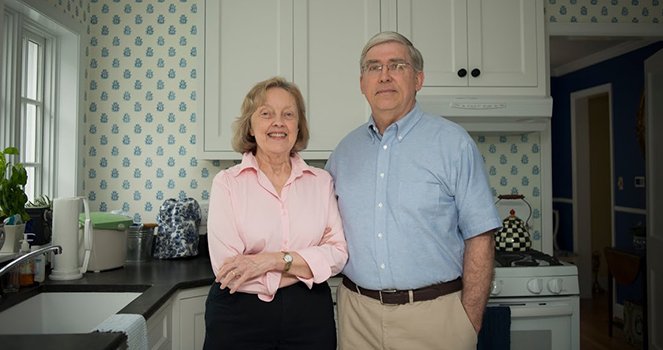 In 2002 when Hayden Letchworth was in the market for a new home, he looked at a Cape Cod that had numerous serious problems, including decayed windows and exterior doors. A number of potential buyers had previously walked away from the West Hill home, but Hayden envisioned a charming two-bedroom cottage and bought it.

After moving in, he visited the local Marvin Window dealer to select replacement windows and get recommendations on contractors. The dealer suggested several local contractors, but when Hayden asked which one he could have the most confidence in doing the job right, the dealer immediately recommended Steve Nash. After discussing the project with Steve and visiting projects that Steve’s company had completed, Hayden hired Upscale Remodeling.

Steve’s crew replaced seventeen windows, fifteen of which were large casements, and three exterior doors. The crew’s expertise, friendliness and standards were so superb that in 2011 when Hayden decided to fully renovate the kitchen and bathroom, he called Steve. (Actually, Hayden’s fiancée, Leonora, was hesitant to move in until what Hayden called the ‘caveman motif’ was professionally replaced in both rooms.)

Leonora, Hayden and Steve worked together to design the renovations which Steve’s carpenters soon carried out in expert fashion.

According to Hayden, one characteristic Upscale’s carpenters repeatedly exhibited during both major projects was their sincere commitment to quality, especially when unexpected problems arose, as they often did in the Letchworth’s 65-year-old home. Possible solutions were quickly investigated and discussed, and when everyone agreed on the best course of action, work continued. Hayden and Leonora never worried that a problem might be quietly ignored. They remain very grateful for the Marvin dealer’s excellent advice from years before.

The Letchworths are tentatively planning on further major renovations and look forward to Steve and his crew returning.

Meanwhile, Leonora has her beautiful new kitchen and Hayden admits he now realizes that ‘caveman motif’ is not actually a style.