The Most Stunning Dental Office Overlooking Cayuga Lake Lives Up To Its “Anxiety-Free” Dentistry Promise! 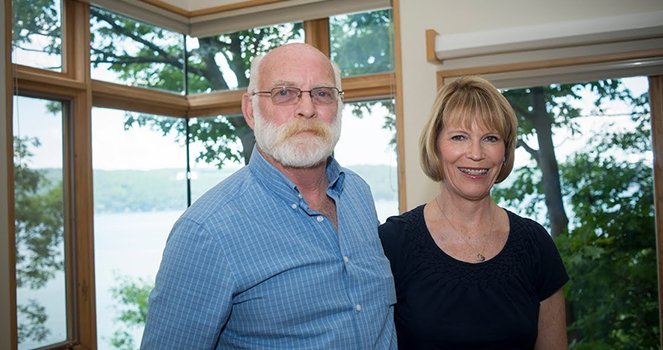 In 2001, Dr. Jan Ormsby and her husband, Gary, wanted a new location for their dental practice. Dr. Ormsby dreamed of a dental practice overlooking Cayuga Lake – Literally. She had actually dreamt about it. — so when the Ormsby’s realtor showed them a house high on the cliffs of Esty Hill in Ithaca, they were SOLD! It had a spectacular location … but it was not ready for patients. After all, it was a HOME, not a dental office.

The Ormsbys hired Upscale Remodeling, and Gary and the team went to work on the design. Gary, who had previously worked for a dental supply company, knew what their desired layout was, but he relied heavily on the Upscale team to redesign the existing three floors and design an addition to adjoin two sections of the house. All three floors of the home were going to be utilized and it was going to be FANTASTIC. The Ormsbys and the Upscale team were sure the end result was going to be stunning.

But there were roadblocks. There were daunting issues that Upscale and the Ormsbys tackled one by one. Parking issues, needing adequate water supply, handicapped accessibility regulations and limited space in certain areas forced the Upscale Remodeling team to approach the project with a critical, hyper-creative, solution-generating eye. But in the end, every issue was resolved.

The result is a most stunning dental office. The waiting room has breathtaking views with 30’-high floor-to-ceiling glass windows. (Upscale Remodeling owner Steve Nash says it is the “most dramatic waiting room” he has ever seen.) Anxious patients can relax, looking out at the picturesque view and the wildlife. Designated as the “anxiety-free” dental office, Dr. Ormsby had Upscale Remodeling build an office that would reflect that designation.

“We couldn’t have had a better experience,” said Gary. “That’s why, years later, we have had them do a number of projects in our home as well.”

“Steve does top-notch work, with all of the right materials,” said Gary. “And he LISTENS. He makes sure you get what you want.”

“I consider [owner] Steve a friend now,” says Gary, “along with [Production Manager] Steve Bossard and [Lead Carpenter] Rich White. We spend time together. But Steve has to stop hiring other guys named ‘Steve.’ Every time I said, ‘Steve’ three guys turned around.” They were probably just admiring the view.